Your search for effective, natural pain relief is over.

MPS (Micro-current Point Stimulation) Therapy is a hybrid modality integrating the principles of acupuncture with modern neurology to provide a holistic approach to treating the body and mind. This combination produces highly effective results that are amazing patients and practitioners across North America.

Scars are the mark of injury to the skin.  They can be external or internal, depending on the cause of the wound.  Most wounds (except for minor ones) will leave a scar, appearing after the wound is completely healed.  The new scar tissue will have a different texture and quality than the surrounding tissue, and it is generally less flexible than the surrounding skin. 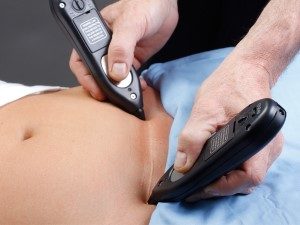 Since the body’s fascial system is interconnected, a restriction or adhesion in one area will often affect other areas and result in compensation patterns and pain.  When a scar has been released there is no longer a restriction in the flow of energy, blood circulation and lymph drainage. The body can then complete the healing process.

Whether from injury or surgery, scar tissue can be significantly improved and softened, and circulation and function can be greatly improved with MPS Scar/Adhesion Release Therapy.

Often, scars result in a tightening of the surrounding tissue that can restrict movement or function in the body. These restrictions not only affect the joint, limb or surrounding area, but they can affect the underlying organs, too.  This is because scar tissue has the potential to spread in any direction, including internally, throughout the body.  Fortunately, releasing the scar can yield powerful results, which can improve mobility, diminish complications and decrease pain often associated with deep scars. 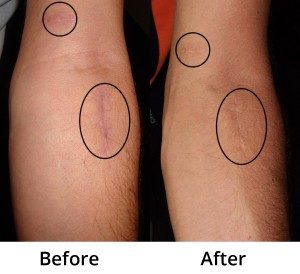 In general, this treatment is completely painless. The use of the microcurrent probes, on the tissue surrounding the scar, creates a healing, inflammatory response.  Dead cells and scar tissue are broken down by the body; circulation is increased to the area; and the lymphatic system excretes the dead cells.  You will see visible changes in the appearance of the scar and gradually will notice a reduction in the tightness and restriction felt at the site of the scar.  The duration of treatment will depend on how long you’ve had the scar, how deep it is, and the severity of any pain you may be having. There is no expiration date on scar release.  MPS has helped a Vietnam veteran retain the use of his leg, some forty years after his multiple gunshot injury.  Equally, burns and scarring from childhood have been successfully released, with accompanying beneficial results, several decades after the time of the injury.

There are different types of scars.  The type of scar that forms depends on the age of the person, skin type, skin condition, heredity and the severity of the wound.  Some of the most common types are: